In March 2016 a 21-piece Splinter spent 3 days recording in the vast desert recording studio that is Mungo National Park. 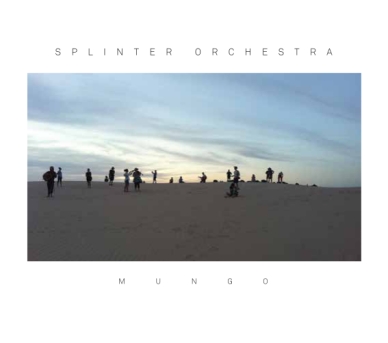 The 3 CD set, their first release in 10 years, (since splitrec 17) presents an argument for a creative collective, sensitive to time/space — one that treats all the participants, be they performers, other species, or the wind, as equal players.

Over the previous two years, they’d honed specific strategies involving motion that manifest differently wherever and whenever they are played out. These procedures were taken to the dry lakebed in far west NSW.

There are 3 movements – Sunrise, Sunset and Midnight on 3 CDs:

Vital Weekly says “Here we have the input from natural elements but with players moving slowly around over quite an open field means that they mix their music in quite a natural way, by allowing every player to walk around and allow each player for a bigger or smaller part of the total mix; a very democratic way of making choices, I think, and one that fits the nature of improvised music very well. This is a more than excellent release! (FdW)”

Joseph Cummings writing in the Music Trust of Australia says, “There’s mystery in these soundworlds. One listens to this recording and is immersed in its secret, luminous, phantasmal fragility. It is both very ambient and extremely attention grabbing. Super melodic but also utterly textural. One worries about not being able to concentrate, to take it all in. Then one gets swept back up by the twittering machine.

Any type of listening you can muster will work for Mungo. At no point did I think – ‘this is really dragging on’, despite three of the four pieces running for between 30 minutes and an hour – in total around two and a half hours across the three discs. There are periods of overwhelming beauty here, but more often I feel like this music accompanies you. You can be in it, be with it. It’s not demanding but it is as engaging as you let it be.”